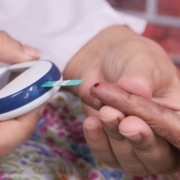 How do you get diabetes?  It is important to understand that there are two major types of diabetes and they each have different causes. Irrespective of the cause, the major problem in diabetes is that the body is unable to utilize blood glucose. The result is prolonged elevations of blood sugar in the bloodstream, which eventually wreaks havoc on many organs, like the eyes, kidney, heart, brain, and blood supply to the extremities.

Over the past few decades, extensive research has been done in the field of diabetes and its causes. While the exact diabetes causes of Type 1 and Type 2 remain unknown, we do know something about the root causes of this disease.

The root cause of Type 1 diabetes is the absence of insulin. For some unknown reason, the pancreas, which normally makes insulin for the body, fails to do so. Extensive research has been done as to why the pancreas starts to malfunction and the following is known:

Unlike Type 1 diabetes, in Type 2 diabetes, the pancreas does make insulin, but the hormone often fails to work. For example, when blood glucose levels are high in the blood, the pancreas will release insulin, which will quickly push the excess insulin into tissues, like the liver, where it will be stored or broken down.

But in many Type 2 diabetes cases, there is insulin resistance, and high glucose levels remain in the bloodstream. At this point, the individual may have a condition called prediabetes. The pancreas will continue to push more insulin to lower the blood sugars, but eventually, the organ will fail, and a simple blood test can diagnose diabetes.

Many risk factors also increase the risk of Type 2 diabetes, and they include the following:

Family history is an important risk factor for Type 2 diabetes. If either one of the parents has the disorder, then one or all the children may also develop Type 2 diabetes later in life. This risk is not 100 percent guaranteed and can be reduced by making lifestyle changes.

Certain ethnicities are more prone to developing diabetes than others. For example, the highest risk of diabetes is in African Americans, and the lowest risk is in Caucasians. However, other ethnicities at high risk for diabetes include the following:

In these ethnic groups, Type 2 diabetes often appears at an earlier age and tends to be more difficult to control.

Advancing age is a risk factor for Type 2 diabetes. With age, all the organs in the body will slow down and become inefficient. A certain percentage of seniors, especially those who are obese and lead a sedentary life, are very likely to develop Type 2 diabetes.

Individuals who are obese are at higher risk for diabetes. Excess body fat can lead to insulin resistance. It is believed that the excess fat may cause inflammation in the tissues, which will prevent insulin from functioning normally. If the individual loses weight, the insulin resistance will most likely disappear.

Individuals who lead a sedentary lifestyle and never exercise are at risk of gaining weight, leading to diabetes. Some type of physical activity is highly recommended to prevent weight gain. Exercise helps burn off excess sugar by making the muscles respond more efficiently to insulin.

Perhaps one of the biggest risk factors for Type 2 diabetes is an unhealthy diet. Many individuals today consume fast foods and processed foods regularly. These foods are high in calories, contain saturated fats, and have high meat content, which are all risk factors for weight gain, leading to diabetes. The best recommendation is to eat a plant-based diet that includes fruits, veggies, whole wheat, low-fat dairy, and nuts.

A few common hormonal disorders, like hyperthyroidism and Cushing’s syndrome, can lead to Type 2 diabetes. However, once these disorders are treated, diabetes will most likely resolve.

Some women may develop diabetes during pregnancy. Known as gestational diabetes, diabetes occurs because the hormones secreted by the placenta interfere with the actions of insulin. The result is a high level of blood glucose. Women who develop diabetes during pregnancy usually deliver a baby that weighs more than 9 pounds. After delivery, diabetes will usually go back to normal, but some women may be at risk for developing Type 2 diabetes in the future. In general, gestational diabetes tends to occur in women who gain a lot of weight during the first two trimesters of pregnancy.

How do you get diabetes?  Diabetes is a serious and lifelong disorder, which is associated with limb and life-threatening complications. It is vital to follow up with a healthcare provider once the Diagnosis of diabetes is made. By changing your lifestyle, eating a healthy diet, and exercising, one can significantly reduce the risk of diabetes. There are many resources available for People with diabetes online. The more you know about diabetes causes, the better you will be able to control your blood sugars.

Cano Health is a leading health care services provider specializing in senior care.  Both Medicare and Medicaid are accepted.  To learn more about what you can do to ensure your good health long into your senior years, talk to a care provider at Cano Health at 1.855.975.5119 today.

What is Diabetes, and What are the Different Types? Scroll to top